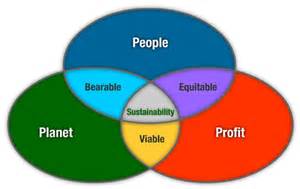 There is a tension in the world, particularly the Western World, which often bubbles up into political trouble. At its extreme the Capitalists (‘hurrah for profit!) stand deeply opposed to the Ecologists (‘humans are just one of many planetary species!’)

Standing between these two extremes of ‘Profit’ and ‘Planet’ are the ‘People’ those of us who are the beneficiaries of profit (from the exploitation of natural resources) and who accept we have some responsibility and obligation to care for the planet (‘we are all valuable!)

It’s not difficult to see that ‘Pristine Capitalist’ of ‘Profit Rules’ might align to Right Conservative politics (in the UK). Their key argument is that people have an obligation to use resources for best effect and that the best way to decide that is if people are willing to pay more than the costs of providing the good or service. Capitalists argue that by employing people and paying taxes they are making their adequate contribution to society and the planet. They assert it is for the Government to decide the priorities for a social and ecological agenda.

The extreme opposite is the ‘Deep Ecologist’, maybe those on the political left, such as the Green Party. They place a much greater burden on the people to elect and choose the planet over profit. They might even feel there are far too many humans, demanding too much from the planet and that short term profit is simply indulgent and short sighted. They argue we will eventually out-consume the ability of the planet to provide.

Most of us ‘People’ can accept both arguments and stand some where in the middle.

We might advocate a ‘Social Contract’ that is an obligation to balance the requirements of the three factors of production; capital, labour and land (Profit, People and Planet). The writer is excited at the animated debate around these issues and feels that the younger generation (despite their Gaming and Pokemon ways) are much more capable of taking forward the sustainability debate (‘How to meet the need of the current generation with out compromising the needs of any future generations’) than are the older team, of whom the writer is a part.

Why? Because the older team grew up with ‘Profit as a God’ which recent ecological focuses have demonstrated is not always sustainable. The other reason is that the generation following us are ‘Feminine’ in their approach. They take a whole and holistic view, balancing the three P’s.

No wonder the cry in any catastrophic situation is (save) ‘Women and Children First’, they are the future.

This entry was posted on Tuesday, August 23rd, 2016 at 10:41 and is filed under Uncategorized. You can follow any responses to this entry through the RSS 2.0 feed. You can leave a response, or trackback from your own site.